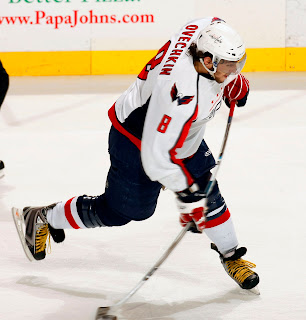 Caps fans got some good news and some bad news today, all revolving around their shining star and the NHL's reigning MVP Alex Ovechkin.

So the good news is that Ovie was named one of the NHL's Stars of the Month for October, along with Phoenix netminder Ilya Bryzgalov and Craig Anderson, who has done a heck of a job minding the crease for the resurgent Colorado Avalanche.

Alex Ovechkin earned second star honors as he led the NHL in goals (14), points (23), shots (85) and tied for second place in plus-minus (+10) as the Capitals went 8-2-3 and opened a seven-point lead in the Southeast Division. Ovechkin matched Mario Lemieux’s NHL record for October with six two-goal games and his 14 goals matched the most he has scored in a calendar month (March, 2008). The reigning NHL MVP became the third player in NHL history to tally at least three points in each of his first three games of a season, joining Guy Lafleur with Montreal in 1975-76 and Peter Stastny with Quebec in 1982-83. Ovie had five goals and four assists in that span.

Now for that bad news - it was initially announced that the Great8 was suffering an undisclosed upper body injury and was listed as day to day. The latest update from the team now has him listed as week to week, which means that the boys are gonna have to step it way up in his absence for sure.

From the Capitals PR department (a special stick tap to Nate Ewell and his terrific team for always keeping us in the loop):

Ovechkin, the NHL leader in points (23) and goals (14) and the league’s Second Star of the Month for October, is expected to miss the fifth game of his five-year career on Wednesday at New Jersey. He has only missed two games due to injury in his first four seasons.

“We have to buckle down,” head coach Bruce Boudreau said earlier Monday. “A goal a game he scores, so we got to play better defense and cannot allow four or five goals a game. You have to win 3-1 and 2-1 and if you get lucky sometimes make it a 4-2 game. I think we have enough character players who understand what we will have to do without Alex.”

Ovechkin played just 7:43 of Sunday’s overtime loss to Columbus and was held without a point for just the third time this year. He was examined and treated by the team’s medical staff and underwent an MRI exam on Monday.

The two-time reigning most valuable player will travel with the Capitals this week to continue to receive medical treatment.

Needless to say, it's time for some secondary scoring boys - starting against Martin Brodeur on Wednesday. Get well soon Russian Machine!
Posted by HOCKEY MOM at 4:32 PM