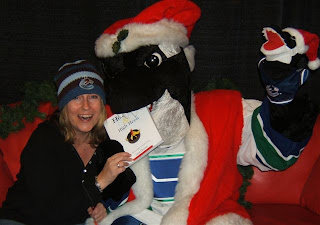 Today Hockey Mom wants to introduce you to one of the greatest female ambassadors of the amazing game of hockey, Lisa Ovens, author of Hockey & High Heels.

Hockey & High Heels was one of my very first reads as a new female hockey fan and it is laugh out loud fabulous! I highly recommend this book to any female hockey fan, whether you’re a newbie or a seasoned “veteran.”

Lisa is a gal’s gal who covers a season following her beloved Vancouver Canucks accompanied by her best friend and hockey sidekick, Stacey. The book covers everything from the history of the Stanley Cup, the definition of a Gordie Howe Hat trick, how to identify a Playoff Only fan (also known as “POOFs") and more from a unique female perspective.

In addition to the book, Lisa travels around North America participating in various NHL Hockey & High Heels events especially for women. In 2007, she was a special guest at the HH&H events held by the Eastern Conference Champion Pittsburgh Penguins and the Los Angeles Kings. Lisa’s Web site, hockeyandhighheels.com attracts hockey fans from around the globe.


Q.What do you find to be the greatest misconception about female hockey fans?

Lisa: That we have x-ray vision eyes so when we are at the games we spend all of our time looking at the players bodies under their equipment, not giving a darn that the ref made a bad call, putting our best PK guy in the box, and we’re down by a goal in the dying minutes of the third period.

I am sorry to burst everyone’s bubbles, but we can’t see through hockey gear, and most of us do give a darn about the drama that unfolds on the ice before us.


Q.How and why did you decide to write a book especially for the female fan?

Lisa: I was working through a rough time in my life and one evening I turned on a Canucks game, and I thought “ah yes…hockey.” What a beautiful distraction, and one that’s always been there. But this time I was looking at it from a completely different place.

My good friend Stacey was also there for me, and we just started having so much fun with hockey that the idea of a book came up. At the time I felt concern for the state of the game: this was pre-lockout and it seemed every other news story or commentary in the media revolved around dwindling fan bases, limited marketing and exposure, etc. It was all doom and gloom. I decided if they were going to focus on the ones not watching hockey, I would focus on the ones who did.

I figured it wouldn’t hurt if I presented a book that was entertaining and positive, one that highlighted the fan’s experience and the fan’s commitment to the game. And then I thought: what if I made it a fun, light and easy read so a new or casual fan would come away with some hockey information, without being overwhelmed, yet sophisticated enough to keep longtime fans engaged and laughing their butts off.

There was so little on the book shelves from the female (non-player) perspective even though there have been several generations and millions of women in love with the game. I really felt that not only did this book need to be written; it should also be promoted as something special that recognized and celebrated female hockey fans. Yet, I also hoped the guys would enjoy the book, too. It was a tall order, considering the variety of fans I intended to reach: new fans, seasoned fans, American fans, Canadian fans, female fans, male fans.

Based on the many emails I have received, I think it must be working, because I have received them from every kind of fan you can imagine. She says and breathes a sigh of relief...


Q.You have some quirky superstitions just like real NHL players, including having the same gal style your hair the same way for home games. What happens if your stylist is off that day?

Lisa: That would never happen, Hockey Mom. This is a finely tuned ritual. Just as the NHL has special scheduling software, so does my stylist, Brandie.

Q.How did you come up with some of the hilarious terminology featured in H&HH? My favorites are "POOF" and the seeding of Stanley Cup playoff teams ranked according to the siblings in the Brady Bunch!

Lisa: Yes, somewhere, in an oak paneled room, Ken Dryden is saying “Dang, I wish I came up with that Brady Bunch and the seeding of playoff teams analogy – it’s gold.”

Often people overlook the tag line on the book cover:Hockey and High Heels: A Different Kind of Hockey Book. I did some things in there that hadn’t really been done before as far as hockey books go.

Now, about the Brady Bunch: I have this amazing sofa, and part of my craft involves countless hours of lying on it and letting my mind wander. And for some reason, a few of the paths inside my head seem to always wind up at the Brady household. I don’t know if that is a blessing or a curse. The seeding of playoff teams and the Brady Bunch is definitely one of my favorite bits in the book too, because the Brady Kids have nothing to do with hockey. However, once you see them as playoff berths and series, the Brady Kids have everything to do with hockey.

The POOF bit - another H&HH soon-to-be classic. In order to help the NHL attract more fans to the games I created a public service announcement campaign. I decided we needed to work on the people who only watch the playoffs by getting them started earlier in the season. That way the hockey lasts longer for them, and they would be more fulfilled as human beings. The term "POOF" is slowly catching on. Once I hear Bill Clement use “POOF” on national TV, then I will know my work is done.

Next up – Part Two with Lisa Ovens of Hockey & High Heels!

Coming up in Part Two of my interview, I ask Lisa what the biggest difference is between female hockey fans and traditional male hockey fans, how the NHL can better reach the female market, how she promotes the book and she'll reveal the biggest misconception about the book Hockey and High Heels.

And finally in Part Three I ask Lisa about the many fans she’s met around North America, the latest on the sequel, Hockey and High Heels book two, who are her favorite NHL players and who she thinks will win the Stanley Cup in 2009.

Hockey Mom hopes to see Lisa at the Washington Capital’s Hockey & Heels event this season – this event is always a sellout and Lisa would be such a phenomenal addition to an already fabulous event. Stay tuned for Part Two!
Posted by HOCKEY MOM at 6:22 PM

Anonymous said...
This comment has been removed by a blog administrator.
September 8, 2008 at 8:21 AM

I am glad you interviewed her. She is as interesting as her book. I love it!!